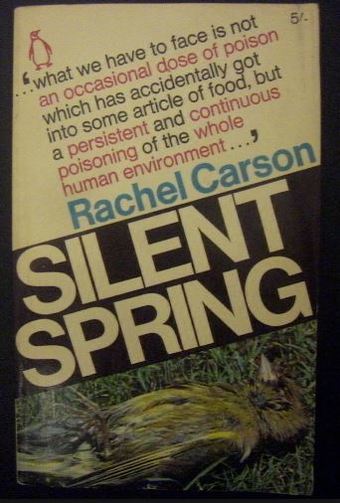 Silent Spring Alarm
Before 1939 in America, bed bugs were so common that smart travelers would pull beds away from the walls, immerse the bed legs in pans of oil or place a sticky substance around the bed to stop bed bugs from climbing the bed to feed. Then in 1939 a potent insecticide called DDT was developed and it became incredibly successful at killing insects in more developed nations. For the next 60 years, DDT was sprayed everywhere in homes, neighborhoods, businesses and even decorative wallpaper was treated with it. The wide and prolonged usage of DDT made the bed bug scourge fade to the bad memories of our grandparents.  Even the often heard "sleep tight and don't let the bed bugs bite" phrase lost it's real meaning and became a fictional nightmare monster to children.

As the decades pass, people started noticing the usually noisy birds at spring were rather quiet and when the problem was examined their populations were found to be dramatically reduced. When birds were tested, they were found to have residual DDT in their systems which was found to be detrimental to their reproduction capabilities. Then testing also confirmed concentrations of DDT in humans especially high in human milk and was thought to be a carcinogen. This raised awareness that a tremendous health hazard was routinely used everywhere and DDT was banned in 1970.

However, Bed Bugs were still a problem in less developed nations and as rapid travel by plane became more common around the world, bed bugs arrived with travelers to the USA and since 2009 have exploded into our society with pest controllers having little knowledge, at first, how to cope with them. Since then, effective methods to eliminate Bed Bugs have been undergoing constant development.

where do Bed Bugs hide?

Bed Bugs are small round rather flat (before feeding) and are often found in mattresses, couches, cushioned chairs, bedroom closets, pillows, comforters, hiding in between blankets or sheets, and many other locations.  You can identify Bed Bug activity by taking a good look at your bed and look for little brown spots along its seams or within the bed framing this is the fecal matter left behind by the bed bugs. Finally, unexplained bites when you wake up may be caused by this pestilence so its worth a free inspection to check it out. Contact Mechanicsville Pest Control for a free Bed Bug inspection.

Bedbug Inspections by a reputable pest control company is offered to our neighbors in Mechanicsville, VA and surrounding communities.

Bed bugs can travel up 100 feet in one night to seek their blood meal. This makes it likely your neighbors awful bed bug problem could become yours in one night as those bed bugs could travel along cables or plumbing pipe routes between apartments, condos, multiplexes and close homes in the city. They are also transferred through the sale of used furniture, clothing new and used, sitting at a movie theater, office, city buses, airplane travel and really anywhere people congregate. Many bed bug survivors will bring pen lights with them to inspect seat cushions before they take a seat.

Bed bugs breed expansively and quickly. A female can lay 200 to 500 eggs in 6 to 10 months. It is medically understood that bed bugs don’t pass on disease but the wounds they make can become septic leading to death in some frail members of our society.

Inspection of home or hotel by a reputable pest control company is the first step to a safe solution. Mechanicsville Pest Control offers a free thorough inspection by our experienced and trained technicians. No commitments necessary just contact us and we’ll be there quickly.

When a Bed bug bites down it will suck blood much like a tick, but it will not latch on, favoring to run away and bite you again the next day.  Their bites will itch very badly and just the creepy feeling you get when laying down to rest may keep restful sleep out of reach. Seriously, you need help to combat these horrible creatures.

Exterminations and treatment are accomplished through a heat method and/or a spray.

Heat method for killing bedbugs uses specialized equipment to raise the room temperature inside the dwelling to a kill temperature above 117 degrees Fahrenheit while making sure the heat travels to all cracks, crevices, behind walls anywhere the bugs can hide or crawl into to escape the heat. This has to be properly performed by a pest control company that specializes in this heat method because sensors must be used to monitor temperatures throughout the area of infestation. The technicians have to be exacting in their duties while performing treatments because success depends upon them getting it right. The heat is raised with big electric heaters wheeled into the dwelling and they crank the heat up to about 135 degrees F. Inexperienced pest controllers have burn down people's home so this job is not for the DYI.

Chemical treatment can involve removing and bagging many household items that can’t be sprayed and taking them to a dump or otherwise keeping the items under wraps for 10 months which the length of time a bed bug can live between meals. Plus, clothing and bedding should be washed in hot water and dried with high drying temperatures. These steps are time consuming and inconvenient which is why most clients prefer using a heat treatment.